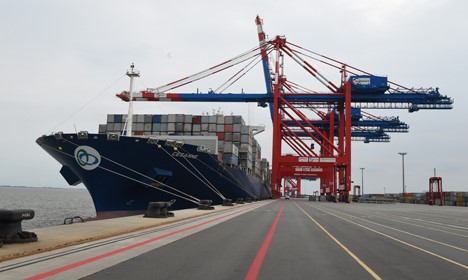 A TEU container ship being unloaded upon arrival at the deep-water port in Wilhelmshaven.

The first years proved a difficult start for Germany’s only deep-water port, Wilhelmshaven’s
Jade-Weser-Port container hub, inaugurated in 2012. But now its operators are seeking to
make it a top terminal for supersize ships.

The head of the Eurogate container terminal on Germany’s North Sea coast, Mikkel
Andersen, smiles as he watches the busy comings and goings down on the quay from up
high in his office.

Among the vessels docked below is a ship with a carrying capacity of 6,000 TEU or &quot;Twenty-
foot equivalent unit&quot; — the unit of measure in the sector.

That is still a featherweight compared to the supersize ships of 15,000 TEU or more that the
port was built for.

Yet despite already ranking as Germany’s largest naval base and the largest import terminal
for crude oil, Wilhelmshaven — situated around 100 kilometres (60 miles) from Bremen —
hopes the Jade-Weser-Port Container Terminal will catapult it into the world’s premier
league.

With the nearby ports of Hamburg and Bremerhaven unable to handle the new supersize
ships, Wilhelmshaven is seeking to give Rotterdam and Antwerp a run for their money and
become the main stopping point in Europe for giant container vessels arriving from Asia.

“The boats are getting ever larger, longer and higher” as shipping companies seek
economies of scale, says Sönke Maatsch from the Institute of Shipping Economics and
Logistics (ISL) in Bremen.

Few ports around the world are able to handle the new giant container ships, sometimes
measuring up to 400 metres (1,300 feet) in length, or have the necessary sea depth for them
to dock.

In Hamburg, the wind and tide can make it difficult for the giant ships to anchor, leading to
delays that can be very expensive for shipping companies.

Wilhelmshaven’s 18-metre deep port allows the huge new ships to dock fully loaded,
independent of the tide at any time of night or day.

Until recently, however, the one-billion-euro ($1.14 billion) port, funded by public money from
the regional states of Bremen and Lower Saxony, was deserted.

Before it was opened, the project was more than 10 years in the planning during the time of
the 2008 financial crisis and the subsequent slump in international trade, he explained.

“As a result of the crisis, business volumes were reduced and additional capacity was
unused. That was one of the reasons why the port was in difficulty,” says Maatsch of ISL.

The failure of a planned tie-up between three of the world’s biggest shipping companies also
hurt the port, which had to wait for Danish giant Maersk Line, the world’s biggest container
ship group, and the Italian-Swiss company MSC to tie the knot in 2014 before customers
started to arrive.

With no work to do, 300 of the terminal’s 350 employees were compelled to go on part-time
hours, as well as forego part of their salary for a year in exchange for a job guarantee.

But now, “there’s a lot of work” and overtime hours are building up, says Andersen.

Since February, three long-distance services leave from Wilhelmshaven every week for ports
in China, Japan, the Middle East or India.

“We’re noticing very large interest on the part of customers these past few months,”
Andersen says.

The port has managed to convince chemicals giant BASF and coffee and consumer goods
retailer Tchibo to transit their goods via Wilhelmshaven.

Andersen did not provide any concrete numbers, but said there would be “no comparison”
between this year’s business and the slim takings of 2013 and 2014, when around 70,000
TEU were turned around.

According to ISL’s estimates, the port handled around 200,000 TEU of goods in the first six
months of this year.

Even if no one is willing to predict when the port will start making a profit, ISL thinks the
container port will be running at full capacity — 2.7 million TEU per year — in 10 or 15 years’
time.

Down on the docks, activity stays busy until the evening. Every week now, one of the biggest
container ships in the world, with 18,000 TEU, is scheduled to arrive from China